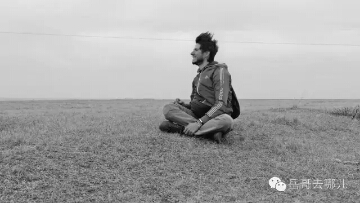 A flat street but no movement forward. It is headwind that I am fighting against that pushed the bike from the road several times. Welcome to the international grass surfing world cup. This is how I felt when riding from Hulunbuir down South across the grasslands of Inner Mongolia. In this tournament, you can only lose against this overwhelming opponent.

Maybe the worst decision was to leave the city of Hulunbuir at all. I should have brought a huge sail to pull me over the grassland. Maybe grass sailing could become popular here. Within two hours I suffered from two flat tires. While fixing them is not much of an issue, the strong gusts sweeping over the flat terrain does make the repair more challenging. After only few kilometers I had to stop the ride again. Another flat tire. It’s already evening and fixing the bike in the wind for a third time seems not too pleasant. I needed to take shelter at the Mongolian tents some few kilometers in front of me. As I arrive there, a peasant belonging to the minority of the Buryat Mongols heartily welcomed me. When the family arrived in the evening I realize that their mother tongue isn’t Mandarin Chinese and we do have problems to communicate since my Russia is not existing. Since they have to pick up their son from another place they even ask me to sit the house until they come back. I felt thankful for so much trust, I mean we knew each other since a couple of minutes and I was asked to make myself at home. I used the time to fix my bike for another time waiting for the folks to return. Since communication was a bit hard they decided to give me a photo album about their family culture while zipping vodka.

The youngest son, 23, will get married soon and so preparations are ongoing. ‘We will built him a tent’, told me the father. ‘We live from breeding sheep and horses. In summer, visitors come to the grassland, so we also built some accommodation for them.’ I have the impression that the people here are tough and sturdy. Don’t talk much, but are amazingly friendly. The family let me stay on the couch for the night.The next morning, the family took off at 5am to care for their livestock. And so, I also start off, still a bit sleepy. Back into the wind!