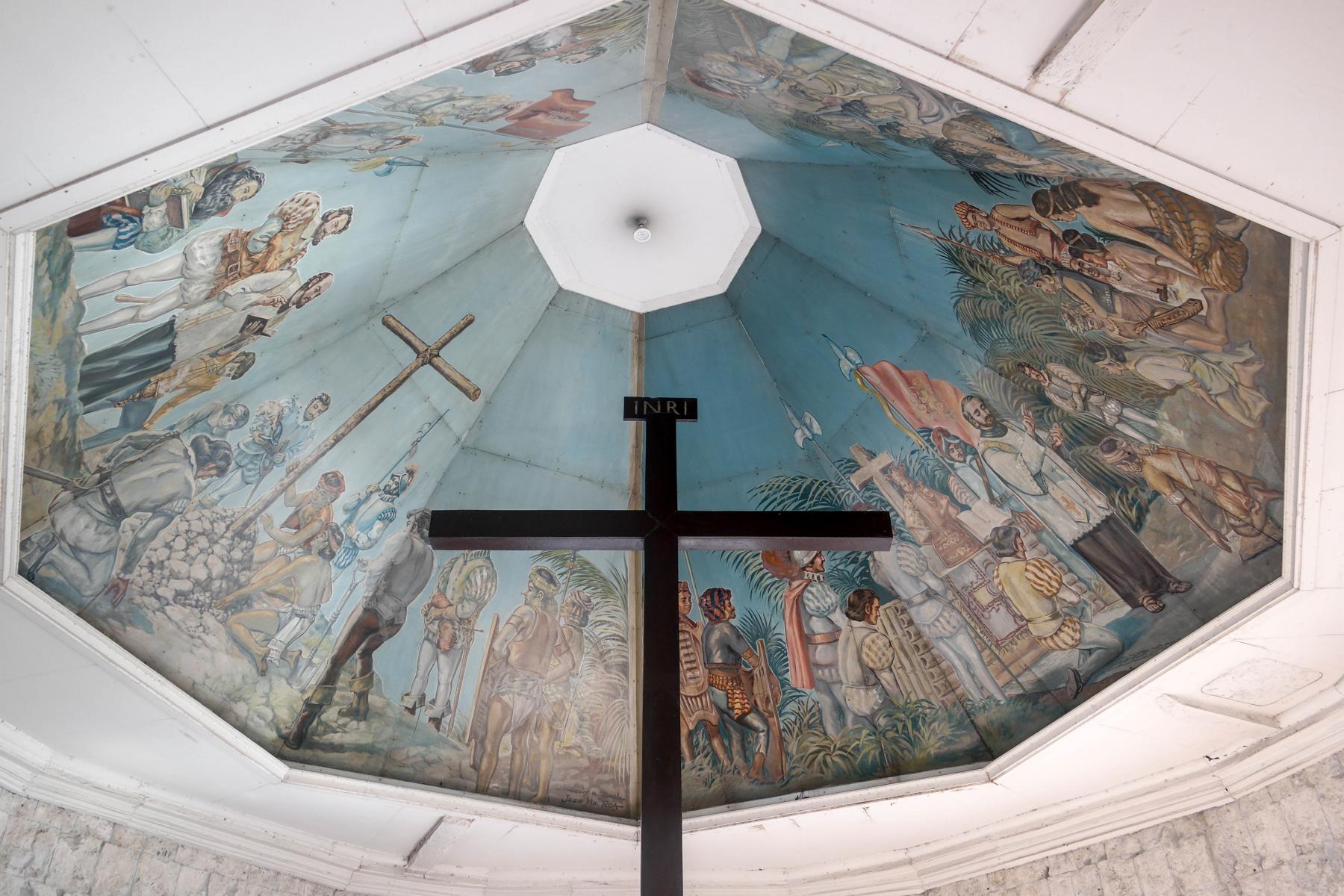 Certainly, Magellan and his fellowship would give a high five if they knew that their gifts became famous sights of Cebu. When the missionary Magellan stranded 1521 in Cebu he erected a cross and brought a Jesus Doll that he gave to the queen. Today, thousands of people come to praise the doll of Santo Nino and see the Magellan’s Cross. The entrance of the Basilica Santo Nino as well the Cross is for free.

You will get easy access by Jeepney from all different places in Cebu. It’s a 10 minute ride from SM Mall, not much more from the Ayala Mall. Just shout “basilica” to one of the Jeepney drivers and wait for him to nod his head. The ride shouldn’t be more than 10 pesos. The spacious square in front of the basilica is used during festivals and can get really packed. In the inside you will find the prestigious altar and in the right wing, a replica of the Santo Nino. Be prepared to queue up to step in front of the doll. The paintings on the walls of the building show the history of Santo Nino and the Philippines. Definitely worth a visit.

When I visited the basilica, a huge ceremony took place. Hundreds of people celebrate the 450. anniversary of the basilica. The square in front of the basilica is decorated in red and yellow garlands creating a great vibe. Celebrations go on for a whole week. It is the most lively prayers I have ever attended. We stand up, we sing, we pray, stand, pray, sing. The ceremony’s climax is the performance of a local dance group. Every Easter, Christmas and Sinolog the celebrations are intense. Amen.

From the basilica it’s not more than 5 minutes on foot to the gleeming white cathedral. I recommend attending a prayer on a sunday morning. The cathedral has quite an impressive acoustic and priests and sisters sing fabulously. No wonder, Cebu and the Philippines seem a very musical place.

From the City Hall and Magellan’s Cross it is only a short walk to the Colon Street. You will find just everything on this stretch of hustle and bustle. Local and from a hygienic point of view rather doubtful restaurants and boring but clean fast food chains. Or you need a toy fish in a shot glass or a fan belt. Choice is yours.

Ayala, Robinson and SM are the biggest property sharks in the Philippines. They run huge shopping malls nationwide, also in Cebu. The SM Mall near the Radisson Blue is a small city in itself. Almost every Jeepney approaches this temple of consumerism. If it gets too hot in the city, a round of hide-and-seek in the SM is an enjoyable pastime.

For culinary experiences head to Ayala Mall in the north. A jeepney from the SM Mall can directly get you there (7 Pesos). Personally, I prefer the terraces with its nice ambience and a great variety of food. There are multiple floors with restaurants for every taste and budget. I recommend “Lemon Grass” and “Casa Verde”.

It takes a 500 Pesos for the cab (return ticket) that takes you to the top of the hill. The entrance to the deck is an additionally 100 Pesos for tourists and 50 Pesos for locals. Even I have never been there the view of City Cebu seem worth the ride.

This national hero somehow reminds me of Conan the Barbarian. However, Lapu Lapu became a national hero when he defeated the great Magellan and killed him and many of his soldiers. The monument can be reached by jeepney to Mactan Island  (10 Pesos) or by ferry boat and jeepney (a tiny bit more). But the ferry ride is a nice opportunity to see the skyline of Cebu.

Yes, Cebu City also has some beaches. They might not be as spectacular as the ones in Moalboal but in case you only have limited time, it’s better then nothing! For a jet set feeling and overpriced but nice coffee, head to Mövenpick Hotel and enjoy the view.