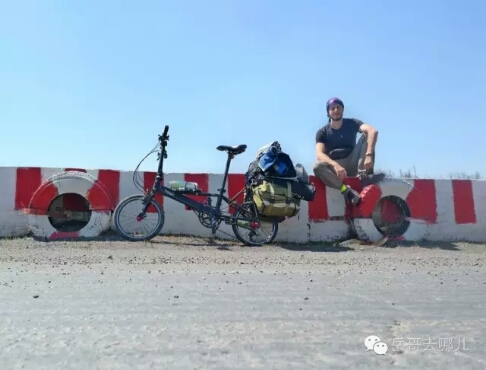 From the small village of Barhu, the next destination on the never ending travel will be the city of Wulanhot. I decided to go South because the owner of the hostel in Hulunbuir adviced me to cross the beautiful city of Arxan rather than Qiqihar and Harbin. And it shall be a good choice. In the summer time, Arxan seems to be a hotspot for Chinese and Russian tourists spending much money to see the places above. A day trip to the nearby scenic spots for hefty 220 Yuan ticket and additional 400 Yuan for mini bus. Not to forget the sky rocketing hotel prices. However, the city of Arxan is a ghost town right now. Streets are empty, only few tourists. I heard that 9 months of the near the people prepare for the 3 month of hardcore tourism. The town itself is fully artificial, big hotels, dozens of restaurants, craft shops everywhere. The only authentic building is the small train station that was built in the early 20th century, by the Japanese. However, the western architecture and lights at night are certainly nice to look at. Despite the empty city, I had great accompany spending the time together with newly found friends strolling along the ghost town, eating hotpot and relax from riding. From Arxan, the road is one of the most beautiful tracks I rode so far. It first goes up the mountain. A tough ascent but absolutely amazing views from the top. Then into a valley, a creek winds its way along the country road. The sun is pleasant and I take lots of breaks to indulge in the landscape. The end of the ride finishes with another exhausting climb of a mountain and a spectacular sunset. I end the day in Mingshuihe village with some fantastic rice noodles, that day was one of the best cycling experiences so far. The next day continues with a tough climb, horsing around with construction people followed by a long ride down crossing various villages. And then suddenly, the unforeseen happens. Having to cross the rail tracks several times I happen to smash my tire on a speed bumper while daydreaming. I manage to make it to the next village. However, all the local repair shops don’t have a fitting 18 inch tire. So I accept the kind offer from Brother Bao who I meet during lunch to take me to the city of Wulanhot. In China meeting the people to the right time is often called Yuanfen, destiny. And I’m thankful that destiny seems to be on my side with the people I met and keep meeting. And I believe the more you go out and have a optimistic attitude, this Yuanfen will natural arise.

Alright, so after having to involuntarily get myself into the city of Wulanhot, I found a place where I can replace the broken tire by a thick one capable of carrying my load. I’m ready to go on… But first, let’s conquer the city of Chenghis Khan, Wulanhot!